All Glory to Sri Guru & Gauranga

His auspicious appearance occurred in the village of Kancanapara, Subdivision madaripur, District Pharidpur in East Bengal (now in Bangladesh) on Friday, November 18th - Utthan Ekadasi Tithi-in the year 1904 AD at 8 AM.

As the pastimes of awakening of All-Merciful, All-good, All-Bliss Supreme Lord Sri Hari on Utthan Ekadasi Tithi (utthana-asakening ) is for the eternal good of all living beings of the world, the pastimes of advent-awakening of His Personal Associate-His Absolute Counterpart Gurudev (Madhav Goswami Maharaj)- on Utthana Ekadasi Tithi, is also for the eternal benefit of all.

The Holy Birth-place of Srimat Madhav Goswami Maharaj is situated at the bank of Padma River which is near to Prematali where Srila Narottam Thakur received ecstatic feelings of Divine love while bathing therein as per the direction of Srimat Nityannand Prabhu in a dream. Sri Gauranga Mahaprabhu kept Divine love in the custody of Padmavati Devi (the Presiding Deity of Padma River) to offer it to Narottam Thakur whenever he would come there to take bath.

Revered Dayita Madhav Maharaj was born of a high caste Brahmin family. His Grand Father, Sri Chandiprasad Devasarma Baddyopadhyay, was a well-reputed prominent person of Vikrampur, Dacca (Bangladesh). His father's name was Sri Nisikanta Devasram Bandyopadhyay; His mother's name was Srimati Saivalini Devi. His mother was of a highly dignified, sober temperament-a wise woman endowed with many good qualities and as such, an object of reverence to all. His father passed away in His childhood.

His parents named Him Sri Heramba Bandyopadhyay; His pet name was Ganesh. Extraordinary saintly qualities were manifested in Him from the time of his boyhood. He was adored by all and was a universally accepted leader in every sphere. He strictly observed ethical rules and celibacy-brahmacaryya-and taught others to observe celibacy and moral rules. His superiors were impressed. Guardians and teachers were astonished to hear from the boy, profound words of wisdom.

He learned by heart, the entire complete Gita, at the age of eleven years merely by hearing Gita from his mother. He practiced severe penance by taking only boiled food once in a day in his second home at Calcutta. During that time, it happened that while He was invoking Sri Krsna for His Grace and was weeping severely in separation grief, He was blessed by a vision of Sri Narad Goswami in a dream, He could not remember the Mantra completely.

He became disappointed and, out of persistent solicitousness, left the house and went to the Himalayan mountains beyond Haridvar where He stayed at a stretch with our food for three days continuously wailing and praying for the grace of Sri Krsna. At last, He heard the prophecy- a divine message directing Him-"go back to your place, do not be disheartened, your Gurudeva has appeared there, take absolute shelter at His Lotus Feet. "

He then came down from the Himalayan mountains, remained for some time at Haridvar and later returned to Calcutta. Subsequently, He went to Sri Mayapur-the Holy Birth-Place of Lord Shree Caitanya Mahaprabhu-with other friends and there, saw the prophecy fulfilled: he met His Gurudeva, His Divine Grace Sreemat Bhakti Siddhanta Saraswati Goswami Prabhupad at Sri Caitanya Math in the year 1925 AD. He was attracted by seeing His Divine Spiritual Personality. He took absolute shelter at His Lotus feet and took initiation from Him at Sri Gaudiya Math, No. 1, Ultadanga Junction Road, Calcutta on 1st November in 1927 AD.

He joined Sri Gaudiya Math Institution immediately after taking initiation and His devout vow of celibacy in young age was unusual and exceptional even amongst that exalted company. He was regarded as one of the most favourite entourage of Srimat Bhakti Siddhanta Saraswati Goswami Prabhupad within a few years by His devout devotion to Guru, His competence in rendering all kinds of service, His untiring enthusiasm and His diligence to serve Visnu and Vaisnavas.

Srila Bhakti Siddhanta Saraswati Goswami Prabhupad, seeing His undaunted spirit to contribute to the objective of the Institution by way of practicing and propagating the Gospel of Divine Love of Lord Chatanya Mahaprabhu, used to commend him saying, "his energy is volcanic energy." Srimat Bhakti Siddhanta Saraswati Goswami Prabhupad never hesitated to send Him to perform any important task or to send Him as advance party as He was confident and sure that the task at hand would be successfully completed in due course.

Srila Bhakti Siddhanta Saraswati Goswami Prabhupad had so much confidence in Srimat Hayagriva Das Brahmacari (Madhav Goswami Maharaj), that He first selected Him to be sent to foreign countries for preaching and for which Passport and everything were prepared. However, an objection was raised. Rajarsi Sri Saradindu Narayan Ray, one prominent household devotee, objected to this proposal on the basis that Sri Hayagriva Das Brahmacari was young and very beautiful, "There may be difficulty in sending such a beautiful young Brahmacari to foreign countries, instead an old sannyasi should be sent there. " By his suggestion, Parama Pujyapad Srimat Bhakti Pradip Tirtha Maharaj was sent.

As per direct direction of His Divine Srimat Bhakti Siddhanta Saraswati Goswami Prabhupad, His Divine Grace Madhav Goswami Maharaj started His preaching in Assam and established three Maths at : (1) Tezpur, (2) Guwahati and (3) Goalpara. He was also managing the seva-puja of Sorbhog Sri Gaudiya Math [in Assam] founded by Srimat Bhakti Siddhanta Saraswati Goswami Thakur. He founded Sri Caitanya Gaudiya Math Institution in the year 1953 and established many big preaching centers in various parts of India. 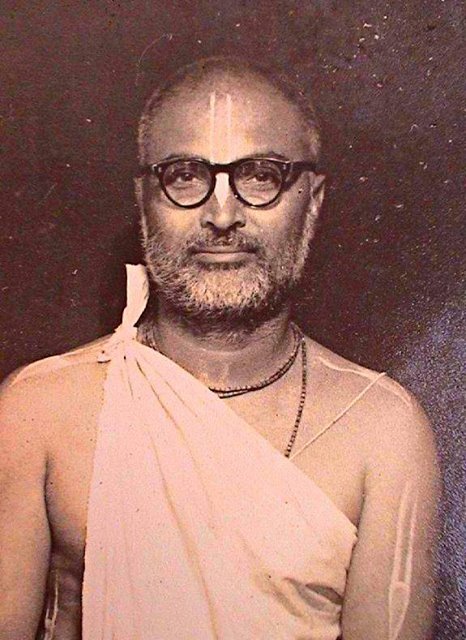 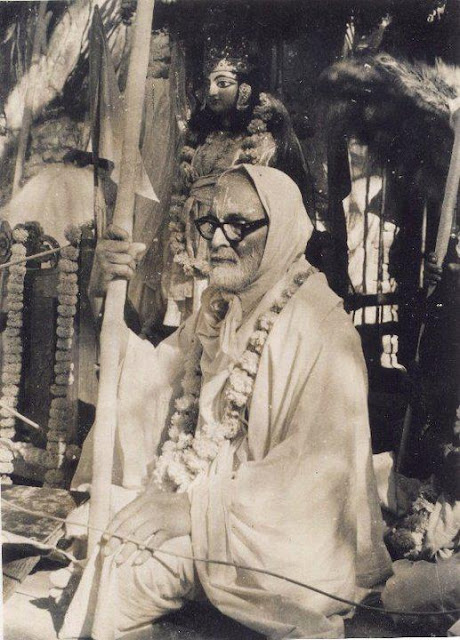 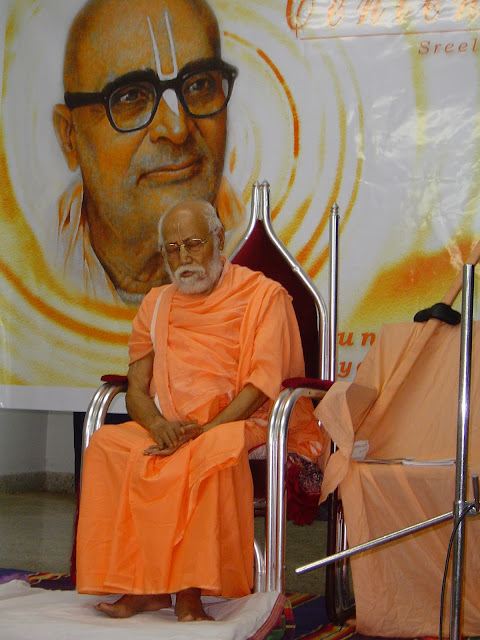 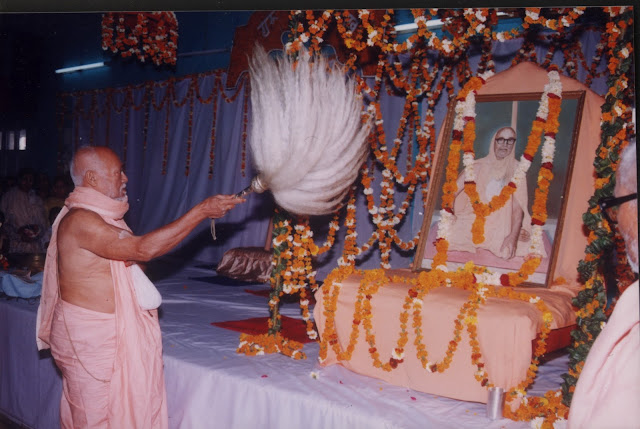 Popular posts from this blog

Remembering His Entrance Into Nitya Lila

Srila Gurudev was always intoxicated in Krishna-nama-sankirtan, whether or not externally conscious. He was lying on the bed and was seemingly unaware as he was not communicating with any one of us externally, but inwardly he was relishing Krishna-namasankirtan offered by the devotees and also inspired devotees from within to come and join sankirtan movement.

Those who performed the sankirtans those last days on earth are the true servants of Srila Gurudev. Even though the sevaks were attending to the immediate medical services of Srila Gurudev, one would think that the best service was done by those who performed kirtans. Of this, there is no doubt.
Srila Gurudev could have concluded his pastimes much before but he chose this way to make us realize that the process of Krishna-nama-sankirtan is the only way by which everyone could stay united for a single purpose. Srila Prabhupad Bhakti Siddhanta Saraswati Goswami Thakur had mentioned in his antim-vani (final instructions) to offer …
Post a Comment
Read more

He Relishes Prasad Only After All Are Served Properly

When Guru Maharaj came out to offer water Tulasi ji, he used to take the darshan of the bhog offering to the Lord, seeing it from the balcony on the first-floor corridor. He could not get Thakurji's direct darshan from that angle, but he could see the offerings placed on the floor in front of them. When he saw their offering plates, he would say, Oh! Today there’s a very nice offering to God. He would be extremely pleased. Later he would remark, But I cannot honor that prasad, what to do?

Pure devotees relish prasad just by the sight of it, for they have no enjoying tendency. They want to relish it, they have that particular consciousness.

On particular festival days like Lord's appearance day, anniversary festivals, etc. he would make a point of requesting us to bring prasad directly from Thakurji's plate. Even if we had his plate ready (from what was separately prepared for him separately due to his special diet) he would not eat that unless we first gave him some pra…
Post a Comment
Read more

I have seen how he was always respectful towards his god brothers and how he taught this also to his disciples— this is really exemplary teaching to give due respect to everyone. It is also my personal feeling that his teachings are really valuable for the Vaishnava community, especially amongst our societies as well as all Chaitanya Mahaprabhu's Mission.

Srila Bhaktivinoda Thakur gave the instructions to us that in order to chant happily, we have to keep due respect to all Vaishnavas, and Srila Bhakti Ballabh Tirtha Goswami Maharaj is an embodiment of that example. He was not…
1 comment
Read more